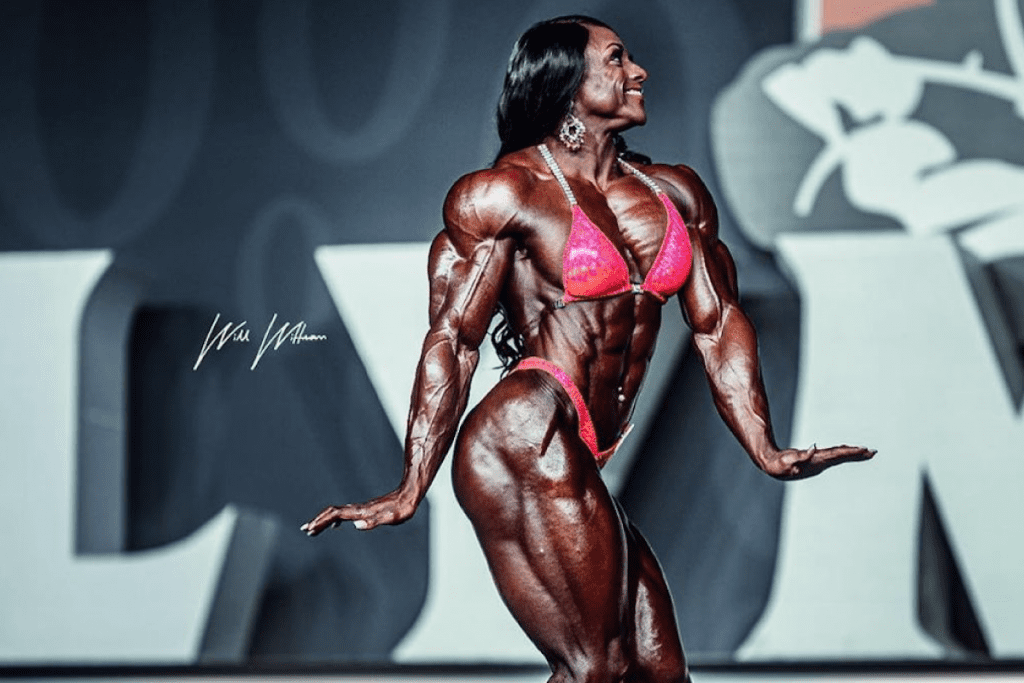 If you’re looking for the best female bodybuilders with amazing physiques then you must consider reading this list. As we know bodybuilding is a sport, which came up during the 1960s and the 1970s.

It’s not just going to gyms and doing pull-ups. It needs dedication of one’s life to one’s career. You’re never going to ever think of stopping!

I’m sure you’re wondering, right now, what it’s all about! According to many bodybuilders, it’s an act of weight training, professional bodybuilding and resistance exercise to contract and form striking physiques.

Best female bodybuilders are not people of a “faint of heart”. They’re full of incredible strength. What marvels many is the rate at which it has become popular over the years.

However, top 5 best female bodybuilders are specifically among the best. All of these best Females bodybuilders belong to the league of the greatest bodybuilders of all times.

In addition, they believe bodybuilding is not only for men! As the most effective members of the global fitness community, they engage in a solid bodybuilding workout just as hard as their male counterparts do.

An athletic body, a lot of discipline, and military-precise exercise ambition. They won’t stop at anything when it comes to bodybuilders’ diet and nutrition.

They train more than six times a week for superb physiques, eat appropriate diets, and count their calorie intake and macronutrients.

Andrea Shaw is at the top list of the most popular and best female bodybuilders from the United States. Shaw began bulking up at the age of 17, all thanks to her mother, a nurse, and an expert personal trainer.

With a BA in Exercise and Sports Science from USA, she competed in five shows in 2018, earning her pro card at the NPC Nationals.

Her astonishing physique got her the second position in the 2018 Nationals and first at the 2018 Lenda Murray Detroit Classic. This kicked off her illustrious physique competition career. She is one of the best professional female bodybuilder and fitness model. Her discussions with the famous bodybuilder; judge and great Lenda Murray of the previous 50 years, during the Toronto Pro in 2019, encouraged her to switch from physique to bodybuilding.

This encouraged her to go in for the Chicago Pro as a bodybuilder in 2019. In only her debut bodybuilding competition, she finished second by one point.

Andrea did not stop till she won two of the most renowned and large female bodybuilding competitions; Ms. Olympia 2020 and Ms. Rising Phoenix champion.

These made her one of the world’s best female athletes and bodybuilders of her times.

Melina Keltaniemi, at 22, is getting started in her career as a female bodybuilder. The most spectacular aspect of this move is that she’s off to a great start!

Her strength and determination to be at the top in the list of best famous bodybuilders are undeniable. So she approaches the sport with the mindset of a champion competitor already. Melina, an astute adversary, prefers to channelize her strength training towards learning and conquering her limitations, maximizing her athletic potential rather than focusing on winning alone.

In the process of getting ready for her next IFBB Elite Pro World Championship, she strikes a balance by engaging in off-season activities to rest. This lets her mind and body recover in a normal way.

Our guide to the importance of rest days and how many you need explains why it’s so important to include them in your schedule and how it might improve your bodybuilding workouts.

American Monique Jones is an expert female bodybuilder and social media influencer with a current position as the 7th in the IFBB Pro Women’s Bodybuilding Ranking List.

Monique was the natural athlete who began exercising as her father got her started with a set of weights at just 13. Monique began utilizing them and found an “instant connection with this type of exercise,” she stated”. She took the first position in women’s bodybuilding at the IFBB WOS Romania Muscle Fest Pro in 2018 plus a fifth in the Rising Phoenix World Championships in 2019.

Her unique bodybuilding physique with the unmatchable features pushed her to the top. She won the top post in the World Games (in 1993) as well as the Ms. Olympia competition of 2000. Of course, these victories aren’t her sole accomplishments; she’s also won the second and third position in other IFBB contests and tournaments. Ms. Olympia (2001) and Ms. International (2000) are some examples of her successes. In addition, her 3rd place results in successive IFBB Grand Prixs were exemplary.

She now runs a strength training organization and offers facilities. Her advice and ideas to all seeking bodybuilding physiques and competing in women’s physique and women’s bodybuilding categories have been noteworthy and has shown the path to several future best female bodybuilders in the UK.

If we talk about best female bodybuilders with amazing physiques and if we don’t mention  Yaxeni Milagros Oriquen-Garcia Perez then it would be highly unfair. This Venezuelan-American mature female bodybuilder is a known strength training professional. With her athletic body on display, she won the second post in the IFBB rankings.

Yaxeni is one of the greatest female bodybuilders of all times, having won the Ms. Olympia title in 2005 as the only Venezuelan-American. Yaxeni, a 54-year-old mature is one of the renowned best female bodybuilder with amazing physiques, believes in athletic body training and leading a healthy lifestyle. She believes that it keeps one younger.

Whether you derive your motivation from female or men bodybuilders, your great strength can get you to the top today. Famous bodybuilders set goals they wished to achieve. And once they achieved all of their goals, they turned their enthusiasm for exercise into a career.

We hope that this list of the most successful female bodybuilders has motivated you to achieve your fitness goals or to start your own.

1.How do I know if I’m a good fit for bodybuilding?

If you’re serious about bodybuilding, then you should start by having a good foundation. This means that you should be able to cardiovascular fitness, flexibility and stability in your joints. It’s also important that you have a moderate weightlifting program that features compound exercises like deadlifts, squats, presses and rows. Building the right kind of muscles will improve your posture, decrease inflammation and support organ function.

2. What should I be doing to prepare for my first bodybuilding competition?

Before you compete in your first bodybuilding competition, make sure to start training regularly and gradually increasing your weightlifting intensity. You can also try incorporating a high protein diet with unsaturated fats and minerals into your daily routine to give you the energy and muscle growth you need. To boost your performance and prevent any injuries, supplement with BCAAs before and after your workouts. And lastly, perform cardio to improve heart health, boost adrenal function, fat loss, joint mobility, and more.

3. What are some common mistakes that newbie bodybuilders make?

4. How can I stay motivated when it comes to training and eating healthy food habits while pursuing a career as a female bodybuilder?

One of the best ways to stay motivated when it comes to training and eating healthy food habits is by setting small, achievable goals. This way, you’re not feeling overwhelmed and stressed out about your progress. Additionally, by writing down your goals each week, you’ll be more likely to follow through and achieve them. Remember to have a positive outlook when it comes to training and dieting as bodybuilding. Be happy that you’re taking steps in the right direction and don’t compare yourself to others who look bulkier or physique-perfect. Equally important, remember to refuel often and make sure to eat plenty of vegetables and healthy protein sources.

5. What kinds of exercises does a female bodybuilder need to perform in order to achieve optimal muscle growth and definition?

1. HIIT or high intensity interval training: HIIT is a great way for female bodybuilders to work on their muscle endurance and stamina. It involves repeating short, intense bursts of exercise followed by shorter periods of rest. This type of training helps to increase the number of calories burned and boost your endurance levels.

2. Compound exercises: Female bodybuilders should focus on compound exercises that involve multiple muscles groups at the same time. These exercises are important because they help in increasing the number of calories burned and reduce the risk of injury.

6. Are there any other key factors that are necessary for success as a female bodybuilder?

There are a few other key factors that female bodybuilders need to focus on in order to achieve their physique goals. Here are a few: –