Bodybuilding is a sport that gave birth to G.O.A.T. personalities, and one of these celebrated legends of all time are, The Rock and Phil Heath.

Dwayne Johnson, often referred to as The Rock, is an American and Canadian actor, producer, and semi-retired professional wrestler. Johnson was a college football player for the University of Miami, where he won a national championship on the 1991 Miami Hurricanes team. After being cut from the Calgary Stampeders of the CFL two months into the 1995 season, he began training as a professional wrestler.

The Rock was initially billed as Rocky Maivia—a combination of his father and grandfather’s names—until he was renamed by then-WWF president Gorilla Monsoon in 1996. He quickly rose up through the ranks of WWE, winning his first WWF Championship in 1998. He subsequently helped lead the company during what has been termed the “Attitude Era”.

On the other hand Phil Heath, the world-renowned bodybuilder who has won the Mr. Olympia title seven times. Born in Seattle, Washington, Heath first began lifting weights at the age of 18. He quickly rose to prominence in the world of bodybuilding, winning his first Mr. Olympia title in 2011.
Heath is known for his incredible work ethic and dedication to the sport of bodybuilding. He has said that his ultimate goal is to become the greatest bodybuilder of all time. With seven Mr. Olympia titles under his belt, he is well on his way to achieving that goal.

While Heath has had plenty of success on the professional stage, he’s also been incredibly popular with fans and sponsors alike due to his outgoing personality and willingness to engage with his supporters. Heath is always looking for new ways to stay motivated and inspired, which is evident in his drive to continue pushing himself to be the best that he can be.

So what are the workout routines and diet ethics they both big personalities following to stay super fit, maintaining their shredded muscular body and feeling super energetic in every second. Let’s find out. 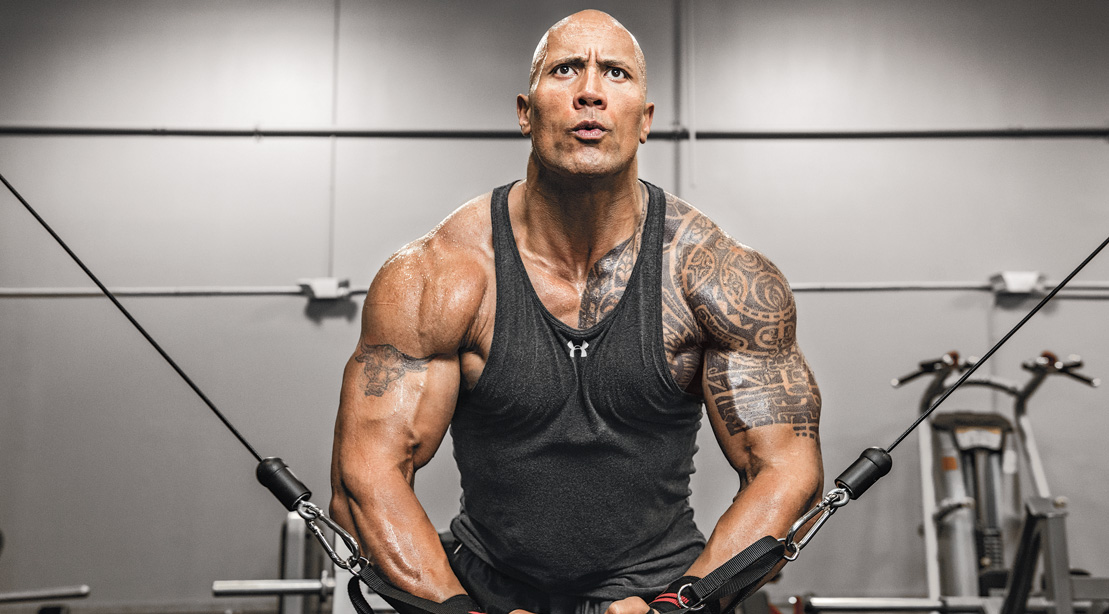 On a typical rest day, Dwayne “The Rock” Johnson can be found indulging in some of his favorite cheat meals. The Rock’s cheat meals are epic in both size and variety, and are worthy of the Herculean force he is.

Refueling his muscles with these hearty meals helps The Rock to stay at the top of his game. Some of his favorite cheat meals include pizza, burgers, and nachos. The Rock is not afraid to indulge in a little bit of everything when it comes to his cheat meals.

The Rock knows that in order to maintain his massive physique, he needs to fuel his body with the right foods. That’s why he makes sure to enjoy some tasty cheat meals on his days off.

The most important thing to remember from The Rock Workout routine is that you need to push hard and push yourself and stay focused on your goals, and you’ll soon see the amazing transformation that you’ve been hoping for. This workout routine is not for the faint of heart, but if you’re willing to give it your all. 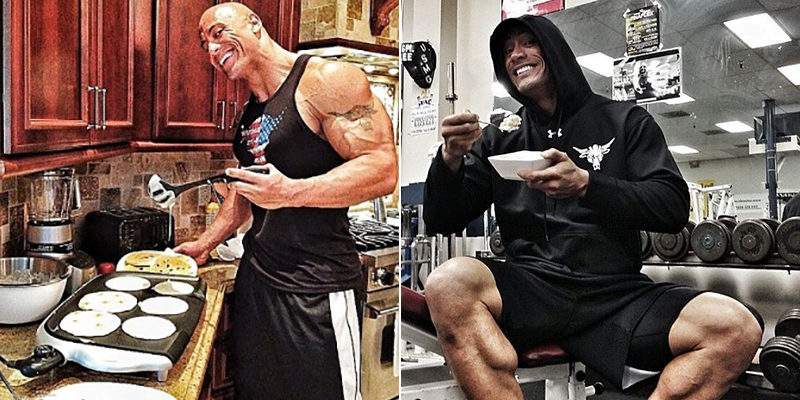 In order to maintain his shredded physique, Dwayne Johnson aka The Rock, eats every 2 to 3 hours throughout the day. That’s 5 to 7 meals a day! His diet consists of a lot of lean protein and vegetables. He starts his day with oatmeal and egg whites, followed by tuna and broccoli for lunch. For dinner, he’ll have chicken or fish with rice and veggies. In between meals, he snacks on protein shakes and bars or fruit.

Phil Heath is one of the world’s most renowned bodybuilders. His workouts are legendary for their intensity and duration. Phil Heath workoutstypically last for around two hours in the gym. His routines are designed to push his body to the limit, resulting in massive gains in musculature and size.
While many people may find Phil Heath’s workouts to be extreme, they have undoubtedly worked for him. He has won the Mr Olympia title seven times, cementing his place as one of the greatest bodybuilders of all time. If you’re looking to bulk up and build muscle mass, then following in Phil Heath’s footsteps may be the way to go.

In order to be the best, you have to train like the best. That’s why Phil Heath follows these workout principles:
Train with a purpose – Every time he steps in the gym, Heath has a specific goal in mind. Whether it’s improving his strength, endurance or technique, he knows what he wants to achieve and goes after it with full force.
Quality over quantity –Heath would rather do 3 sets of heavy squats with perfect form than 5 sets with sloppy technique. He knows that ultimately, it’s the quality of his reps that will help him reach his goals, not the quantity.
Rest and recovery are key – In order for his muscles to grow and recover from intense workouts, Heath makes sure to get plenty of rest. 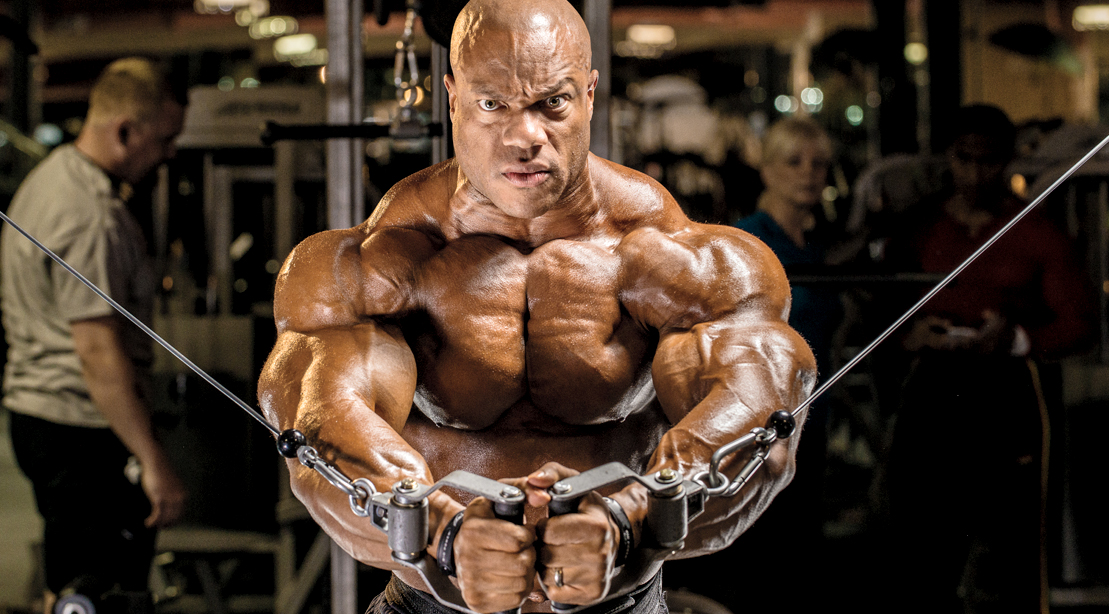 Phil Heath has added cardio exercises to his workout routine. This is a bit of a surprise, as most bodybuilders tend to shy away from cardio. However, Heath says that he feels that it’s helped him improve his overall health and physique.
Heath typically does 30 minutes of cardio, once a week. He usually does a mix of running and elliptical training. He also throws in some sprints for good measure. This addition to his workout routine has helped Heath stay leaner year-round.

While many bodybuilders will tell you that cardio is unnecessary, Phil Heath is proof that it can be beneficial. If you’re looking to add some cardio to your own workout routine, consider following Heath’s lead.

In his quest to become Mr. Olympia, Phil Heath has employed a variety of different training methods. One such method is the Fascia Stretch Training system, popularly known as FST-7.

FST-7 is a training protocol that involves performing seven sets of a given exercise, with the goal of stretching the fascia surrounding the muscle being worked. This type of training is believed to lead to greater muscle growth due to the increased time under tension and resulting increase in blood flow to the muscles.

Heath has found success by combining FST-7 with other tested exercises, such as heavy compound lifts and higher-rep isolation work. This combination has allowed him to build an impressive physique that has earned him seven Mr. Olympia titles. 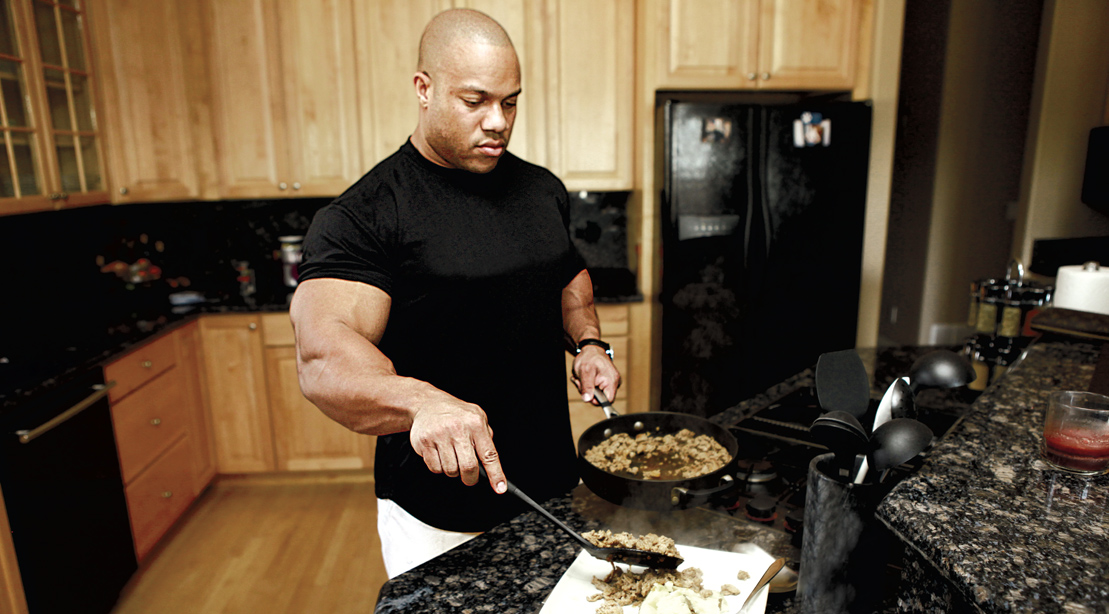 When it comes to diet and nutrition, seven-time Mr. Olympia Phil Heath is all about quality over quantity. The former bodybuilder turned professional fitness model believes in eating nutrient-rich foods that will help support his intense training regimen. Here’s a look at Phil Heath’s diet plan.

In between meals, Heath snacks on healthy foods like nuts, fruits, and vegetables. He also drinks plenty of water throughout the day to stay hydrated.

The Rock and Phil Heath are two different people in their profession. The Rock is an actor and a producer, while Phil Heath is a bodybuilder. While they may have different professions, they both have commonalities. Both The Rock and Phil Heath follow a strict diet plan that includes a lot of protein and healthy fats. They also consume a lot of calories to support their muscle growth. In addition, both bodybuilders supplement their diet with creatine and other performance-enhancing supplements.

Even though their schedules are different, both men place a high importance on their workouts. Both The Rock and Phil Heath’s workout routine is the amount of time they spend working out each day. Both men typically spend around 2 hours in the gym, focusing on different muscle groups each day. This allows them to get the most out of their workouts and see results quickly.

While there are some similarities in their approach to training, there are also some key differences. The Rock typically does more cardio than Phil Heath, as he wants to maintain a high level of conditioning for his movie roles. Heath, on the other hand, focuses more on isolation exercises though he also added cardio exercise in his workout routines, to help him build size and shape.

Despite their different approaches, both The Rock and Phil Heath have had success in their careers. The Rock is one of the biggest movie stars in the world, while Heath is a seven-time Mr Olympia champion.

Top 10 Most Famous Aesthetic Bodybuilders of All Time